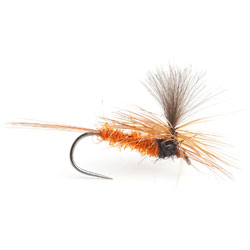 I am not sure why this fly is not more popular amongst anglers. The black coloured version is a staple amongst all Australian anglers while the orange version doesn't get the credit it deserves. On many occasions both in Tasmania and on the mainland, I have had fish ignore the black spinner and eat the orange one. From early in the season right through to the end, this fly is eaten well. Once again, the presence of mayflies is helpful although not a prerequisite.

I love the larger sizes of these as they float well and people with poor eye sight seem to be able to follow the drift of the fly much better but on the rivers, the smaller version is always eaten with gusto.

Mainland River’s such as the upper Mitta Mitta and Murrumbidgee are full of fish that love this fly while in Tasmania, all of our mayfly waters (both river and lake) are ideal locations to fish this fly.

As I previously mentioned, if the black one isn't working, change to the orange before going away from the spinner patterns. Barbless.

Sold out
Add to Cart